I have no new project pics that don't look an awful lot like the ones from the last post, so here's a gratuitous puppy pic.


Rolling with the punches is not one of my strengths, but with every project there will be some kind of problem that needs to be overcome. That's something you just accept as an artist. However, when you end up with a problem that you experienced 7 years ago and forgot about...well, let's just say I'm not well pleased with myself.

As strange as it sounds, I have come to the conclusion that you just can't keep open bags of thinset too long. Even though I have always kept them sealed against humidity (so they weren't clumped), if they've been open too long, the thinset doesn't have the sticking power it has when it's fresh. Maybe there's another explanation for it, but I'm at a loss.

After completing two sections, I found that some of the tiles were popping off the edge when I tried to move the mesh section. Ugh. It only took me about two days to remember that a project I worked on in 2011 did the same thing, and when I bought a new bag of thinset - problem solved.

It kills me to waste about half a bag of thinset, but if it won't stick tight, it's useless. New bag in the studio and I would be off to the races, except that I'm waiting for the next shipment of tile. Should arrive any day, but until then...

Posted by Lee Ann at 10:51 AM
Email ThisBlogThis!Share to TwitterShare to FacebookShare to Pinterest 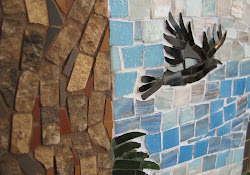 Click the picture to hear my radio interview with RT Thomas of Creative Connections. We discuss inspiration, roadblocks, and some of the business issues artists face.